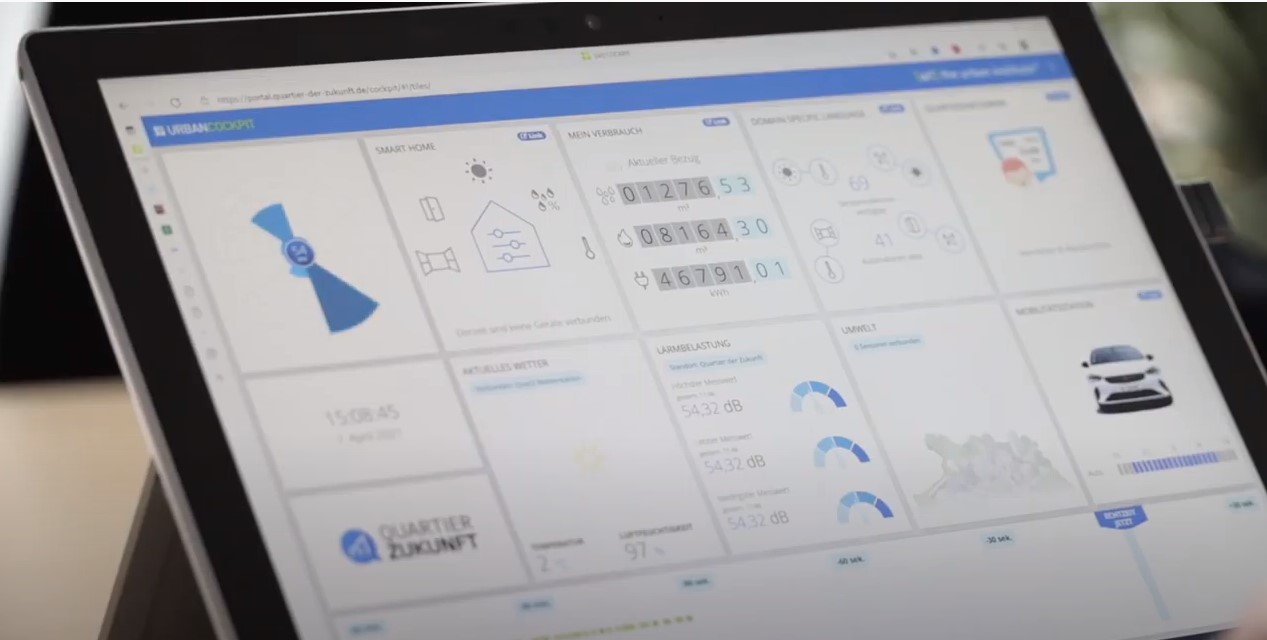 Public utilities in Rüsselsheim draw up a balance sheet of successes

An interaction of already existing infrastructures and technologies to develop a more advanced project. This idea was born at Stadtwerke Rüsselsheim in March 2016. The result was the "Quarter of the Future." A research project ultimately launched in 2018, for which the public utility and its four project partners - including the [ui!] Urban Software Institute - had successfully applied for funding from the "Smart Service World II" program at the German Federal Ministry for Economic Affairs and Energy. Now, at the end of the three-year project period on June 30, 2021, the public utilities took stock in a press conference.

Maik Landwehr, Project Manager and Head of Digital Service at the public utility company, spoke of a complete success. "Our goal was to create useful benefits for residents in their everyday lives. We succeeded in doing that." Thirteen services have been provided, he said, "A total of around 3.8 million euros has been invested, which will now be permanent." More than 100,000 euros have been permanently invested in the neighborhood itself. For example, in the electric charging station, in e-car sharing with popular Opel Corsa E, with which more than 10,000 kilometers have been covered since October 2020. Or in the digital weathercock on the roof that collects weather data. And in all the services that turn an apartment into a smart home.

At the heart of the neighborhood of the future is the neighborhood COCKPIT developed by the [ui!] Urban Software Institute, which displays all the services that have been established and implemented clearly, concisely and simply at a glance for residents. When taking a closer look at an area, one can switch to the specific pages, such as electricity consumption. This means that there is no longer a need for 10 individual apps to view one's data, but only one platform. In addition, personal data only needs to be stored in one place, which enables and secures personal data sovereignty.

Managing Director Hans-Peter Scheerer summed up: "The 450,000 euros we spent on the project was money well spent." After all, he said, the public utility company had gained a lot of know-how from joint developments with the project partners from science and technology. He mentioned the so-called Smart Invoice, a modern form of electricity billing: "Here it is possible to offer a product that distinguishes us from other competitors." All that has been installed in the "Quarter of the Future" will remain, he said. However, there will be a charge for some of it.

Some of the benefits are not just for the local residents or the public utilities as a company, but for the entire city of Rüsselsheim. For example, the city now has a digital smart city platform at its disposal, on which various services for everyday life are networked. For example, an open data portal that collects and makes available freely accessible data such as weather information and geodata.

Mayor Udo Bausch, who is also chairman of the supervisory board of Stadtwerke Rüsselsheim, said: "The Quarter of the Future project shows which technologies will enable intelligent living in a lively neighborhood today and in the future." Bausch praised the cooperation between the public utility company and its four partners, which had created synergies.

Managing Director Torsten Regenstein of Gewobau (Gesellschaft für Wohnen und Bauen Rüsselsheim), landlord of around two-thirds of the 115 residential units in Horlache Park, said at the press briefing: "For us as a cooperation partner, this is a kind of real laboratory here to gain experience and see what services are needed on the part of residents."

It is now being examined whether other neighborhoods can also adopt the experiences and solutions made in the project in order to develop Rüsselsheim into a smart city.

|Source and further information at: https://www.stadtwerke-ruesselsheim.de

Active environmental protection with the support of AI

[ui!] is developing a climate protection monitor with the city of Langenfeld

How does a data platform help the neighborhood of the future to become smart?